The blog is a hit in the Midwest too!  Good friend and party potato guru 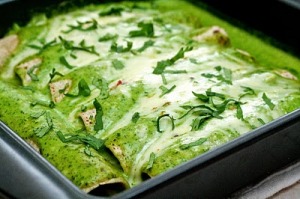 Krissy Hof says: I see that there is a pretty solid Bolognese up already.  Even though that is my fav recipe, here’s another.  This recipe is based on an enchiladas verdes recipe by Rick Bayless, who I think is the nicest man in the world. I can’t wait for him to take me on a Mexican adventure where we visit so many pueblos and eat the s— out of their towns. I added more heat and more cilantro than his original version, so things like the chipotle peppers and extra cilantro can be removed to taste.  -ts